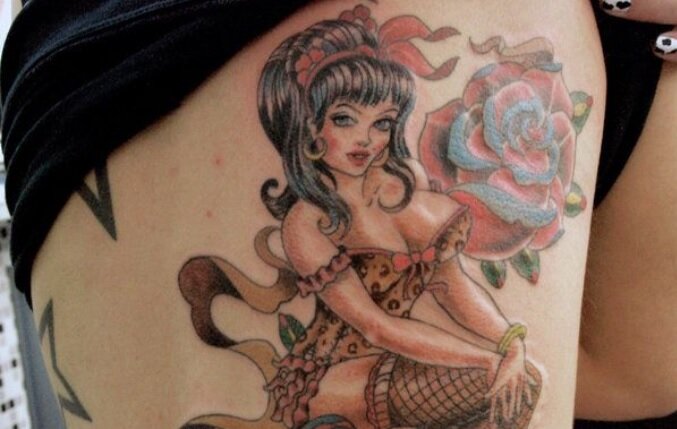 The most stunning, often outrageous collection of Pin Up Girl Tattoos you will ever see!  Pin Up girl tattoos. What does that sum up? To me, for some reason, it sums up the 1940s and 50s. I don’t know why. Maybe because a lot of pin up girl tattoos look like Jean Harlow or Mae West or Dorothy Lamour or Marilyn or Rita. You know what I mean? That Golden Age of Hollywood thing. Guys had girls like this tattooed onto their arms or chests before going to fight in WWII or Korea. Does that make sense? That sort of vibe I’m talking about? Maybe it’s the phrase “pin up girl”. It’s reminiscent of a bygone era…. Or maybe I’m just complicating the whole thing too much and people just want to ink themselves with hot chicks. Let’s check some out.

This is about as old school as you can get. Looks like something from in between the World Wars. The classic, classic pin up girl tattoo done on a sweethearts arm just before he goes to sea to fight the Germans or the Japanese.

Again, the style here is old school, from back in the day when men were soldiers and women were pin ups. But the style on this girl is not from the 40s or 50s. It’s totally punk. Could be original punk from the 70s but more likely later than that. It’s a cool idea to use basic, old school pin up style but use the style of your own tribe. Like it.

Every Kind of Kitchen Tattoo – Tattoos of the Day

This one absolutely sums up the genre we’re talking about here. Straight out of the era, the smile, the body language, the sailors hat. If you closed your eyes and thought up “pin up girl”, odds are that the image you’d conjure would look something like this. Check out the tattoo itself – the artwork. It looks like it came from a movie poster or something like that. It reflects the pin up era perfectly.

This is a beautiful tattoo. Audrey Hepburn was a beautiful woman. This image from the “Breakfast at Tiffany’s” era (early 60s) sums up something super classy. Trying to imagine just who would have this tattoo, and I’m pretty sure that it would be a woman, not a man. I could be wrong, but I just bet that this is on a woman. Like celeb tattoos? Check out this Rihanna collection.

Staying on the classic theme, check this one out. Sunshine, surf, beach, wayfarers, California in the middle of the 20th century. You can just see that she’s waiting on the beach for her man who’s out there on his longboard. Despite my imaginations about this piece, just see how the artist has worked with the shadows and tones of her skin. Outstanding.

There’s some juxtapositions here in this tattoo. You got that whole sweet, innocent, 1950s look about her face, complete with pearl necklace and THEN you got the fact that she’s packing some serious heat in the form of a Bugsy Malone type machine gun. Not to mention the uplifted skirt and the exposed stockings and garters. Great imagery here.

Hanging On The Telephone

Another piece of classic pin up girl imagery right here. 50s style everything. Love the three tones going on here. One third Black and white, one third pink, and one third brown.

The Girl With The Bandana & The Bee

A different, more modern style here. Less of the old school and more of a graffiti tip. There’s a great deal going on here, but what I love most are her lips. I think that “bee stung” is the description here, Which is apt, cos there’s also a bee featuring in this tattoo as well.

Here’s a pin up girl with a twist. She’s blue for a start. And 3D (apparently). Just love the colors in this one, especially her lips and the turtle too. Actually, I have no idea who’s prettier here – the girl or the turtle. That’s something I never thought I’d ever say in my life, ever. Wow. Great tattoo though.

Yeah right. Like the milk bottle is the first thing that grabs your eye here. Keep telling yourself that (actually, the ink work on that milk bottle is fantastic if you DO cast your eyes away from the, um, other parts of the piece. Love that light making it look shiny). Also loving her eyes and the baseball cap. This is pure NASCAR all the way, and I mean that as a total compliment.

This one is wrong on so many levels. Pin up girl tattoos are meant to be a celebration of feminine beauty. They’re meant to be enjoyed as a slightly risque diversion from the drudgery of life. This tattoo goes against all that. The bandaged arm is the most disturbing, bringing up images of self-harm and self-loathing. This is a tattoo designed to make you think, and that’s what makes it so great.

What I love about this tattoo is that fact that it’s in profile. Not many pin up girl tattoos are, if you think about it. Most have the girl twisted around archly in some angle that gets all of her best assets. This one could be on a coin. Loving the mask and of course, those lips. Those lips make the whole thing perfect.

Not sure why, but this one has a kind of Spanish theme going on to me. Maybe the black hair or the golden earrings. Or the roses. Just feels all flamenco. Probably not Spanish at all, but that’s the thing about tattoos – they can be anything that you want them to be.

With a yo ho ho and a bottle of rum! Avast there me hearties! This tattoo freaks you out a bit, cos you’re checking out her body and her beauty and then you notice that she’s got a hook for a hand! Of course she does – she’s a damn pirate!

The Most Original Pin Up Tattoo Ever

Not strictly a pin up tattoo in the original sense, in that either this guys arm is too small or her face is too big. But those lips and that baby blue say pin up all over. The originality here is fantastic!

Pin Up On A Pin Up

This girl is a pure pin up in her own right. She should BE a tattoo! That checkered shirt, headscarf and milkshake all scream that 50s rockabilly pin up thing. And then check out her throat… she’s got a pin up girl tattooed on her herself! Quite, quite brilliant.

Outside of the outstanding, outstanding artwork in this masterpiece, I just love the fact that it’s on a woman. There’s something very sensual about a Japanese geisha at the best of times, but all over the side of another woman? That’s some cool, sensual stuff going on right there.

Another fantastically original pin up tattoo here – much more modern in style than the traditional. It’s like a Picasso piece but a full sleeve instead with a cool ass pin up as its main feature.

… And Another Sailor Girl

What could be a better way than to finish off this run down of pin up girl tattoos than  going right back to the original roots of sailor and girls? Check out this much more contemporary version of basically, the first tattoo we showed here, but essentially the same thing. A dude off to sea tattooing his woman onto him. Great stuff!

So there you have it. Some pin up girl tattoos from the classic old school styles through to freaky through to modern and everything in between. As we said, maybe people just like getting tattoos of hot chicks. Amen to that!